This weekend was quite different from the others as it was spent with funny and beautiful UNKNOWN people!
This Saturday we woke up early, as usual, and we left to Maroubra, 40minutes by bus from home. When we arrived a big, sunny and warm beach was waiting for us. This beach reminded us of our beloved Guincho, with the same length, white sand, wind and smell. 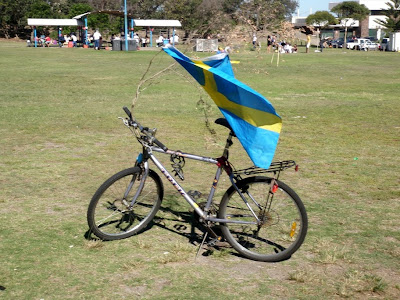 After a few hours of sun and walks on the beach we left to the barbecue area, were a big Swedish party was being held. You must be questioning why were we in a Swedish party... well... 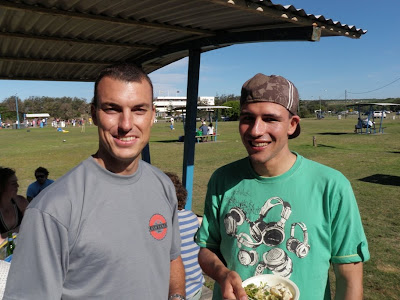 The facts are these: One of Pedro's best men works in England, where he met a really cool polish guy named Tym. Well, a few months ago Tym decided to move closer to his Australian girlfriend so he moved to Sydney and Bruno (Pedros best man) gave us his contact! As they both Tym and girlfriend did Erasmus in Sweden, they were friends with all the community! 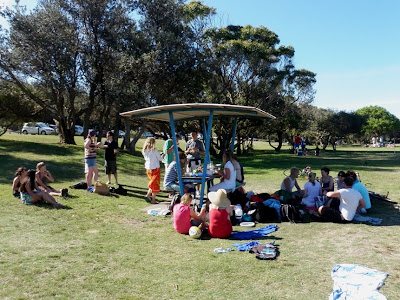 After eating some Swedish delicacies and chatting around we were convinced by that people to abolish public transport and start using exclusively the bike everywhere (obviously we are not as fit and big as they are, but we'll manage)!
That night we went to the movies and saw "Maos last dancer" which we highly recommend.

Sunday, while Pedro was "sailling" in Double Bay, I decided to go to Bondi beach with Sonsoles where we spent the day with some friends of her, Noelia , Scott and Ignacio, and where we tried to sell some of Noelias old cloth in a garage sale. A garage sale, with NO garage. 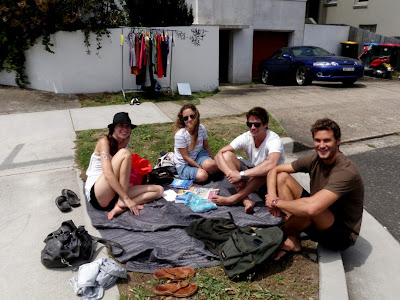 In Australia everybody does garage sales in the weekends to get rid of unwanted items or just place the things outside for someone else to find some use to it, like it has been done for years in Barcelona.
It was a very nice weekend... until Pedros misadventure!
Posted by MeRiaN at 09:12