Today, for a change, I will write in English, mainly to say thank-you for this wedding present.

Mariana's dear ERASMUS friends offered us a voucher for a Diving School here in Sydney, and after alot of postponement, mainly because of the constant string of visitors or trips that we've had, we finally got around to do the Dive.

So this Saturday, we went down near Cronulla to the diving school. Things weren't looking great as Mariana had a bad cold, and we didn't hear the alarm, which made us late by 30 minutes, but we jumped straight into the classroom to hear the theoretical part of the coarse. In the room, we met Greg, our diving instructor. He took us through a few panel with the basics of diving. Well, actually he read what was written on the panels adding an "ok", in between the lines, which got a bit tedious. 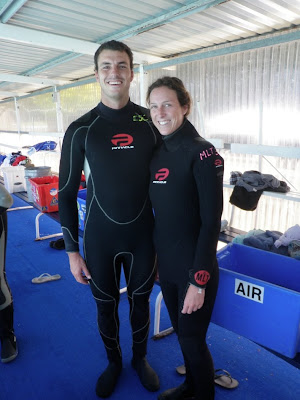 After this session, we headed out to the pool where we would learn the basic skills that would allow us to dive safely. We spent around 30 minutes putting on the wet-suits (which took time because they gave Mariana what seemed to be a suit for a very short lady, clearly not the case), and having Greg go through what we were to do. Very slowly. Without a hint of fluidity, whatsoever. 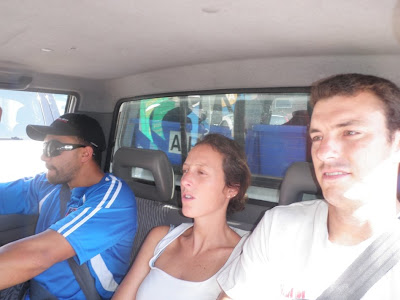 All geared up, we went inside the pool where Greg again explained each skill very slowly and convoluted. By this time, both we and our "classmates", two new-zealander siblings with Samoan background started getting a bit more playful letting out a joke here or there, only to get an "ok" and an awkward look from our instructor. 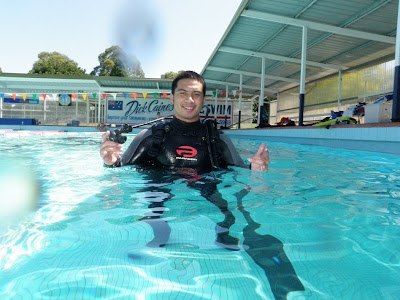 When we finally finished ou set of 3 skills, we headed for the beach where we would get to dive in the open water. on the way there, we talked about sharks and shark attacks, which did great to lighten the mood! Greg would invariably come back saying, oh, but this won't happen, it never does. Of coarse, the though on the back of my mind was "yeah, and sailboats don't crash into islands, it never happens..."
Out on the beach, we were presented ou lunch of bread rolls, tomatoe soup and peanut butter, which was unexpected to say the least. For some reason, Greg thought it would be best if we ate our lunch while dressed with the wet-suits, which was quite novel. 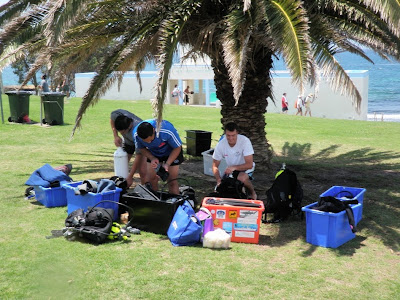 Once again, we painstakingly endured all the explanations of each single step of what was about to occur, all with the utmost detail that you could perhaps expect from a german. All along, we would exchange glances with the two brothers, trying hard not to laugh at the poor instructor.
We again geared up and headed down to the beach, looking a bit odd in 7mm wetsuit in the scorching sun, amidst hundreds of people happily diving just in their "cozzies".
With the greatest possible care, ever followed by a flurry of explanations, Greg got us all into the water above the spot where we would descend. He took the two brothers down calmly, and then it was Mariana's turn. For some reason, she would not sink for anything. Any time the instructor let go of her, she would come bobbing back up. While descending, we would have to equalize the pressure in our sinus to avoid popping eardrums and the pain that comes along with that. In part due to her cold, Mariana had to ask to go back up because of the pain. When she finally managed to get the pressure right, and feel good she looked at the instructor and showed him a thumbs-up to say she was good. Unfortunately, in dive language this means go up, which prompted Greg to quickly take Mariana back up!

When we were all finally down in the bottom, the instructors took us along a wall of rock, filled with fish of every colour. Some where shy and would hide away at the mere sight of us, while others, like the blue grouper, would hover around us like a puppy dog. We were immersed in this amazing world of colour and life, all while breathing through a strange odd-looking contraption. 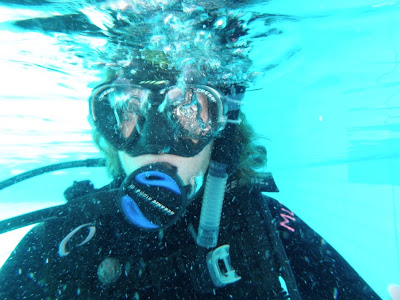 We would be ducked down to some cave to be shown a cuttle-fish, which everyone thought was an octopus, or shown a moray eel hiding under a rock. 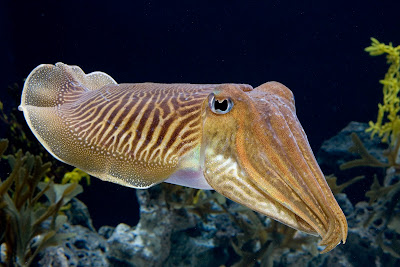 (Obviously not our picture)
Just as we were relaxing and feeling at home under the sea, Mariana's air bottle reached it's half-point, and we were forced to return back to the real world, where gravity weighs you down like a tonne of bricks.

All in all, the experience was great, ranging from the excelent company provided by the NZ brothers, the wonderful dive, and the eccentricity of our instructor.

For all this, we have to give a giant THANK YOU to Marga and Jaime. It was really an incredible experience, and we still can't believe you would give us such an amazing wedding gift!!
Posted by Voz at 22:10